Multan (Thursday, December 15, 2016): The directorate of National savings of Pakistan is going to organize a scheduled balloting draw of Prize bond 200 at Multan City today at 8:00 am. According to the previous draw’s history this is the 68th and final draw that is going to held on Thursday 15.12.2016. Thus this is the 68# number draw of the two Hundred prize bond denomination. You can download the complete Rs 200 Prize bond list of 68th Draw  Result on dated 15 December 2016 at Multan city. This Rupee 200 prize bond denomination is the old prize bond from the beginning of national savings history and have the good prizes. This first prize of this  denomination Rs.750,000 (Seven Lakh & fifty Thousand or ساڑھے سات لاکھ) that is good amount for this very little amount of money papers. You can be lucky one only if you buy this denomination. I recommend you to buy the whole serial of 200 bonds of one serial. That will increase to win more chances. This online 200 prize bond list 15 December 2016 qura andazi may be the life changing digit in your life. If you are not settled to get this cheap but worth Paper then you can get help from prize bond schedule 2017 next year for the 200 prize bond draw dates that’s off course in March 2017.

This will not stop here and you can win the other five prize of worth Rs.250,000 (Two Lakh & Fifty thousand or اڑھائی لاکھ) that have the most chances to win. I am unlucky so far since last 5 year of purchasing this prize bond for first and second prize. But I have win about 8 prize of third number. That fill my prize bond purchasing cost. You have most chances to win the third prize very most. The The third prize is of amount 1250 (One thousand two hundred and Fifty rupees or ساڑھے بارہ سو روپے) this is not a good amount for money after waiting for months and years but this reminded me only that I will win the first aur second prize very soon Insha Allah. Your full Rs 200 Prize bond list dec 2016 will be not waited for long time now and will be coming out after some hours.

You must try out your self and increase the prize bond net worth in your home balance. This Rs 200 Prize bond Draw 68th List Result 15 December 2016 at Multan by national savings of Pakistan will be updated very soon and I will update you on this page. You will get the first number and second prize 5 number at 9:00 am that are announced by Kohenoor TV and joJo live TV. The complete list of 200 prize bond list December 2016 of Multan city dated 15-12-2016 will be updated at evening time and we will updated this complete list here very soon. You can download 200 prize bond list 15 December 2016 online here. 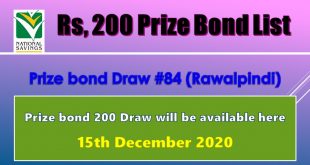